You may be surprised to learn that excessive texting causes neck pain. What’s not surprising is the number of chiropractic clients that experience both neck and back pain from excessive use of their smartphones. Just take a look at any group of pedestrians walking along a busy sidewalk and you will find dozens of people texting as they walk. If they’re sitting on a park bench, they are texting! Riding public transit, they’re texting! The most disturbing of course is texting and driving, but we’ll save that topic for another discussion.

A study conducted by Dr. Kenneth Hansraj and posted in the Surgical Technology International Journal, explains why excessive texting causes neck pain. The study concluded that while looking down to read or send texts on your smartphone is the equivalent of placing a 60-pound force on your neck. With that amount of force, it’s no surprise at all that excessive texting causes neck pain.

Where the study gets interesting is when the subject tilts his or her head forward to send or receive a text message. The computer model deduced that as the forward leaning angle of the head and neck increases, so does the force on the neck. The illustration below, provided by Dr. Hansraj, shows that with just a 15 degree angle the force on the neck more than doubles to 27 pounds. Slouching to 60 degrees drives the force up to an astounding 60 pounds.

To put this in perspective, 60 LBs is equal to approximately 4 bowling balls, or the equivalent of six large bags of groceries. Imagine placing that load on your neck for up to two to four hours each day. It’s no wonder that excessive texting causes neck pain. 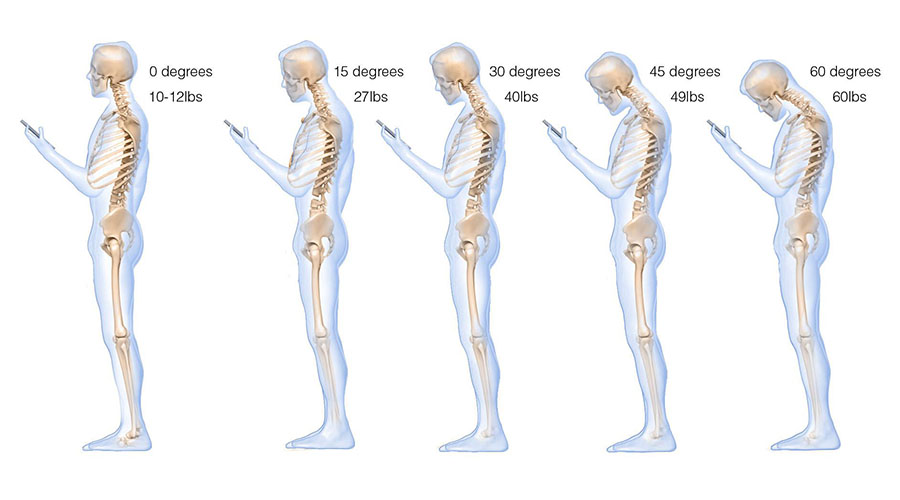 How to Avoid Neck & Back Pain Caused by Excessive Texting

Limit Your Texting: Some studies show that the average smartphone user sends close to 100 texts per day. The number is even higher among users in the 18 to 24 age group. What’s concerning is that this number is going up each year. Try to limit the number of text messages you send each day. Don’t be afraid to pickup the phone or utilize a hands-free device in your car.

Hold the Phone Higher: You can reduce the strain on your neck when texting by simply holding the phone in a different location. Raise the phone to eye level to prevent your head and shoulders from slouching forward.

Take a Break: Some texters will spend their entire lunch break sending one text after another. That’s 30 minutes of non-stop pressure on your neck. Take a break!

Chiropractic Adjustments: When your texting gets out of control and back and neck pain sets in, you may need a chiropractic adjustment to realign your neck and spine to relieve your pain.

I love coming here; it makes me feel so much better! I come in stressed out and in pain, and leave completely relaxed and pain-free.

I felt a little sore the next day, but then my pain completely went away.

I have been coming to Windy City Chiropractic for years; it’s the only thing that works for my headaches.

Dr. Lvova has amazing hands; she always finds kinks in my muscles and works them out. And even though she’s very strong, her adjustments are very gentle and effective.